HOME >>     Indian Customs and Traditions
Ever wondered about Indian customs and traditions?


Four thousand years of continuous culture has meant that a number of Indian customs and traditions have come down to the present generation almost without a change for thousand of years. These customs invariably invoke curiosity in the minds of visiting foreigners making them wonder what they mean. We try and de-mystify for you some of these customs which have remained part of Indian traditions for more than a thousand years.... 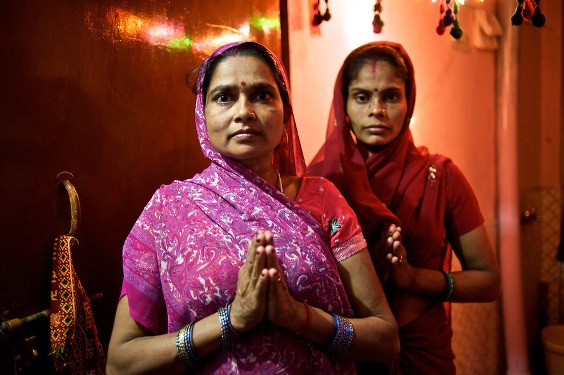 Namaskar or Namaste is the most popular form of greeting in India. It is a general salutation that is used to greet or welcome somebody and also for bidding farewell. While doing Namaskar, both the palms are placed together to greet a person. It is believed that both the hands symbolise one mind, or the self meeting the self. While the right hand represents higher nature, the left hand denotes worldly or lower nature. 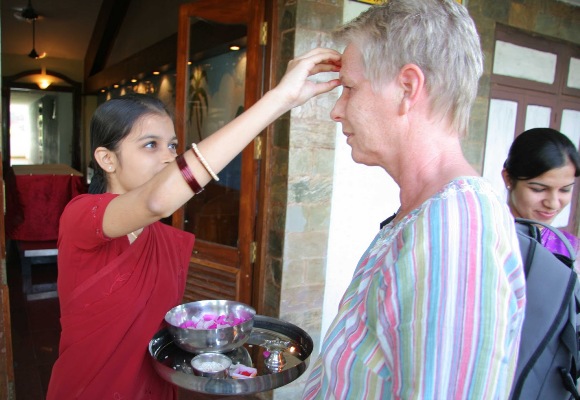 A lady welcoming a guest with a Tika

Tilak is a ritual mark on the forehead. It can be put in many forms as a sign of blessing, greeting or auspiciousness. The Tilak is usually made out of a red vermilion paste (kumkum) which is a mixture of turmeric, alum, iodine, camphor etc. It can also be made of a sandalwood paste (chandan) blended with musk. The Tilak is applied on the spot between the brows which is considered the seat of latent wisdom and mental concentration, and is very important for worship. This is the spot on which yogis meditate to become one with Brahma. It also indicates the point at which the spiritual eye opens. All thoughts and actions are said to be governed by this spot. Putting of the coloured mark symbolises the quest for the 'opening' of the third eye.

All rites and ceremonies of the Hindus begins with a Tilak topped with a few grains of rice placed on this spot with the index finger or the thumb. The same custom is followed while welcoming or bidding farewell to guests or relations. 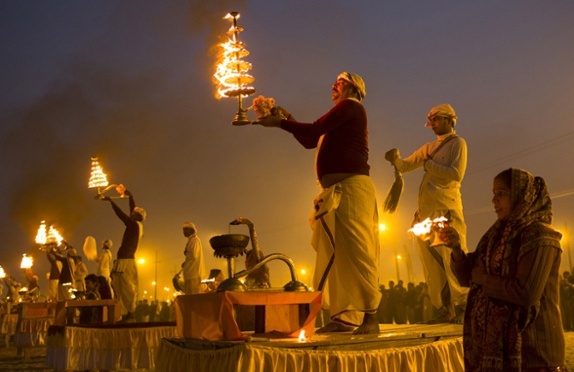 An Aarti ceremony at a temple

Aarti is performed as an act of veneration and love. It is often performed as a mark of worship and to seek blessings from God, to welcome guests, for children on their birthdays, family members on auspicious occasions or to welcome a newly wedded couple. The Aartis is also performed to ward off evil effects and the malefic influence of the 'evil eye'.

For performing Aarti, five small lamps called niranjanas are filled with ghee or oil and arranged in a small tray made of metal. A wick is made out of cotton wool and placed in the lamps. A conch-shell filled with water, auspicious leaves or flowers, incense or lighted camphor are also placed in the tray. The lamps are lit and the tray is rotated in a circular motion in front of the deity or the person to be welcomed. 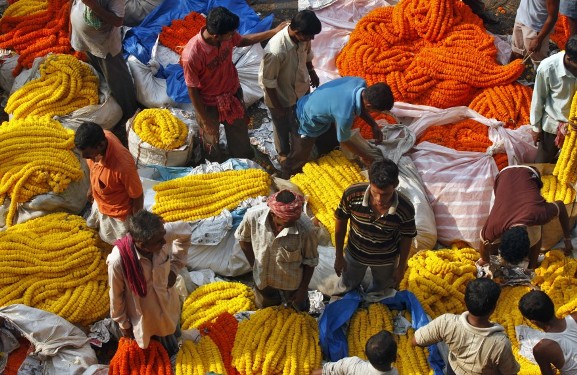 An wholesale market of garlands 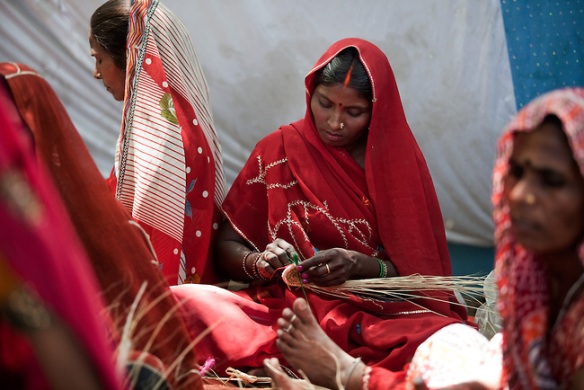 Women wearing Bindis
A bindi is an auspicious mark worn by young girls and women. Bindi is derived from Bindu, the Sanskrit word for dot. It is usually a red dot made with vermilion powder which is worn by women between their eyebrows on their forehead. Considered a symbol of Goddess Parvati, a bindi signifies female energy and is believed to protect women and their husbands. Traditionally a symbol of marriage, it has also become decorative and worn today by unmarried girls as well. No longer restricted in colour or shape, bindis are seen in many bright colours and in different shapes and designs.